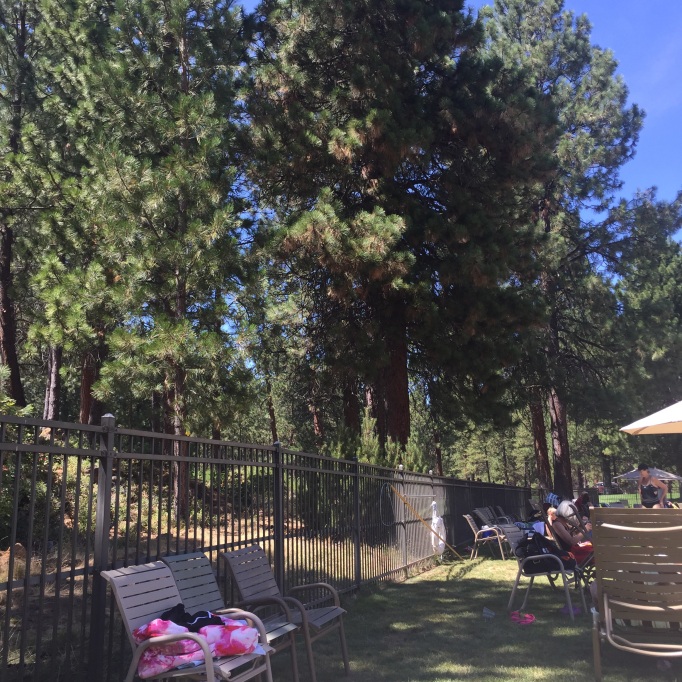 Sometime during the day, take a step outside of your house and listen really carefully. You can tell what time of the year it is by what you hear. If it is winter a muffled hush will try to make itself heard over the fallen snow. Autumn will have the sounds of cars rushing by as people return to their busy lives that they had left behind during the previous months. But if you hear the sound of splashing water and kids screaming in the distance, you know that it is summertime. It does not matter where I have settled down in the United States, this sound was always someplace in the background during the summer months. It is either the sound of summer for the United States, or I have always lived within earshot of a pool.

It is the same for the quiet community I have found myself in during the last part of my trip around the world, Black Butte Ranch. This place is a paradise in central Oregon. It is full of houses that people either own or rent for a week, and they use it to get away from the bustle that their real lives force them to live. One of the features of this place is the four pools that they have in various parts of the grounds. During the summer months, these are the places that are packed with vacationers trying to unwind a bit and escape the heat. They allow families the opportunity to spend some time together and have fun. It is also the place where kids can play games that have nothing to do with their electronic devices. It might be the last bastion where you can hear the shouts of joy from children left in the United States because it is the one place where Apple, Android and Microsoft can’t invade.

Where I grew up, there was a pool a fifteen minute walk away from my house, and the call of it always sounded in my ears during the summer months as this joy of my friends having fun floated over the roofs of the houses and made it to my front yard. I spent my summers at the pool helping to create that lure. It was my escape. I would spend forty-five minutes of every hour playing some kind of game in the pool, whether it was Marco Polo or some kind of elaborate team game of keep away involving a beach ball. If we ever tired of those games, we would go over to the deep end and show our skills on the diving board for a while. During adult swim, we would find a warm piece of concrete that we could lay down on to quickly dry off before we ran to the snack shack to fill up on candy so we would have energy to run wild in the water after the fifteen minutes was over. If I think back on the summer months of my youth, I automatically go to these.

Going to the pool does not hold the same magic. My wife does not want to walk around the pool with her eyes closed yelling Marco while I swim just out of her reach responding with Polo. It is still a great place for us to hang out during the hot summer months. We just find a comfortable recliner around the pool and bathe in the rays of the sun while losing ourselves in the story of some novel. The children screaming and having fun might reach our ears, but it turns into background noise that reminds us what time of the year it is. We will still grab a treat from the snack shack but it will be a cool drink or some ice cream to cool off a bit. Every once in a while we will dip into the water to cool off a little further, but we do not play games. Instead we wade around the water, occasionally going completely underwater, and talk about what the future holds for us or what the past has taught us. It may not hold the same appeal that I found when I was a kid, but it does not mean that I do not enjoy them any less. It is still the one thing that pulls me to it every summer.

I have not spent a lot of time around a pool this summer because I have been busy doing a lot of other things, but as the sun started to beat down a little more than usual, I was glad that I was able to find some time at one this summer. It doesn’t matter where I am in the world, it is the sounds of pool life that makes me know that it is summer.