If you are looking for nightlife in Taipei, you should not go try and find the fanciest club or the greatest bar, but instead, you should head to one of the many night markets, and participate in what the locals like to do for fun, eat street food. It is a great tradition here, and the food that you find at these markets is not just good, but it might be some of the best food that you can find in the city.

I went to the Raohe St. Night Market, and the city sections off the street to traffic so vendors can set up their stalls and cook their food. You know you are in the right place because you can smell the aroma of good coming at you from a few blocks away, and as soon as you enter, your stomach just yearns to be filled with some of the things that it is smelling. That is except for the stinky tofu. It is a fermented tofu that is a delicacy of Taiwan, and when you get close to a booth that sells it, you know why it now has that name. I did not try any partly because of the smell, but partly because I am not a big fan of tofu, but that does not mean that I couldn’t find other regional delicacies there.

One of my favorites was a steamed peppered pork bun. Basically it was peppered pork that was rolled up in a dough and then baked on the wall inside of a round oven. They would pull them out hot, put them in a wrapper and sell them to you. I knew it would be good because of the queue of people that lined up to get one. 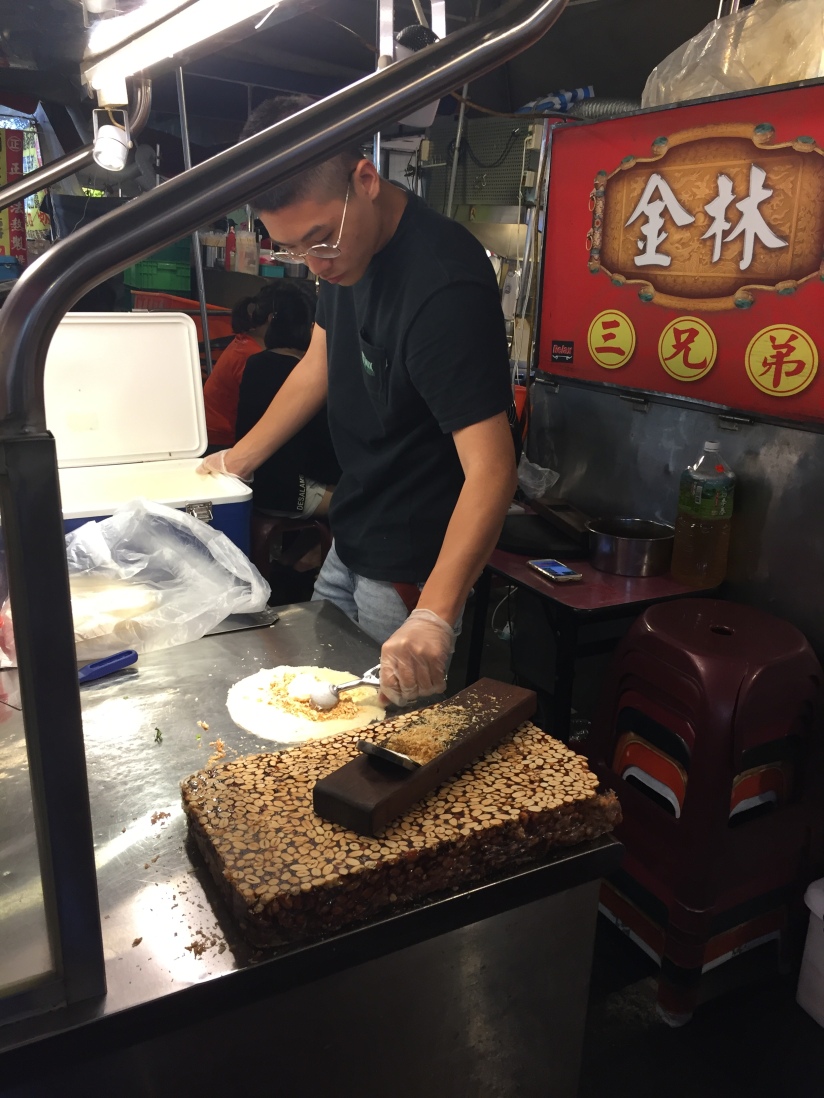 That was the best way to find out which type of food was the best. Besides smelling something that would grab your attention, there were always those lines of people. If it wasn’t for one of those lines, I would have missed another one of the better dishes that the market had to offer.

There was a desert that could only be found in the market, and it was fun to watch the guy make each individual one. Basically it would start off with a crepe, that he would first fill up with the shavings from a block of a peanut brittle. He would then add in three scoops of a pineapple ice cream, and then add a little cilantro before wrapping it all up in a small little burrito.

It was the perfect treat to end the night with, and it was one of the more memorable experiences from going to Taipei. It is a stop that has to be made while visiting here, or it would be like you never learned what the place and people were actually like. It is the heart of the city, and it doesn’t matter which one you go to, you’ll always find a pulse there.

One thought on “The Night Market – Taiwan Day 7”