Back when I watched television, I remember a commercial of a person taking a trip from Flagstaff, Arizona to Phoenix, and how they shed their clothes along the way because of the changing weather. On my last day in Europe, I had a similar experience. I took a bunch of trains with many stops along the way from Murren, Switzerland on top of the Alps to Frankfurt, Germany where I took a plane back to Bangkok. I left at 8:30 in the morning wearing all of my warm clothes to hopping back into shorts and a t-shirt by the time I went to bed the next night. I thought I would point out the change as it happened by taking a picture at each one of the stops along the way. 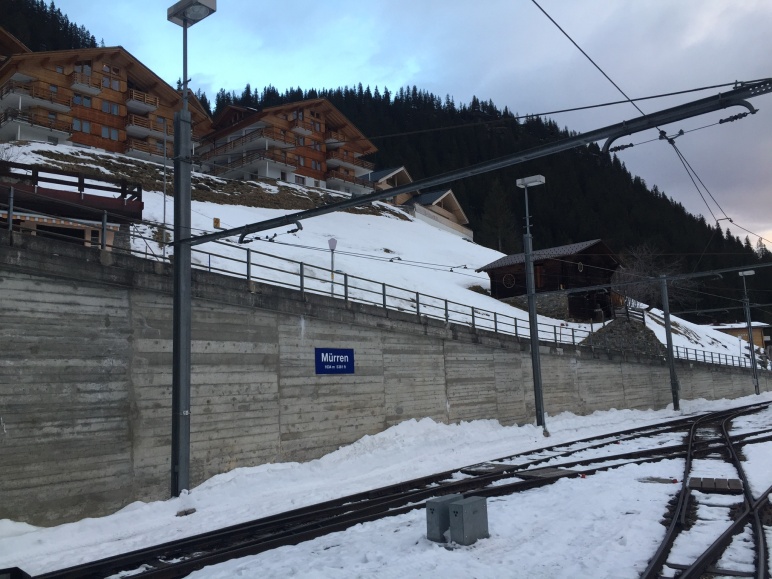 Murren, Switzerland was the highest point, and the coldest. I had to bundle up and crunch across the snow. 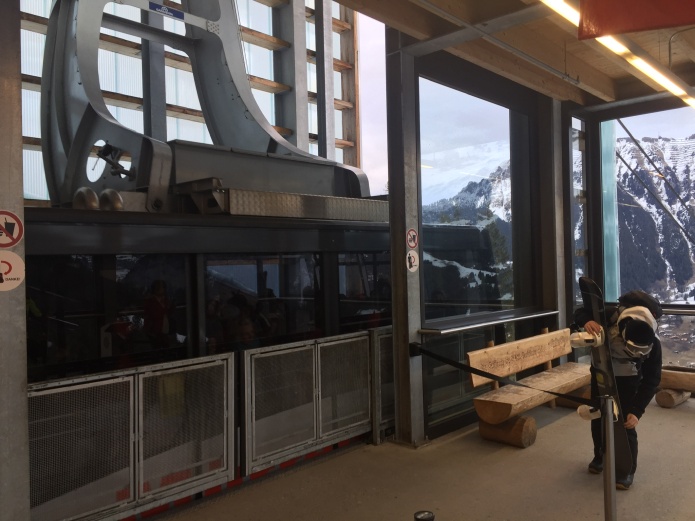 We were still pretty high up when we arrived in Grutschlap, but did not have to leave the station as we waited for the cable car to take us down the mountain. 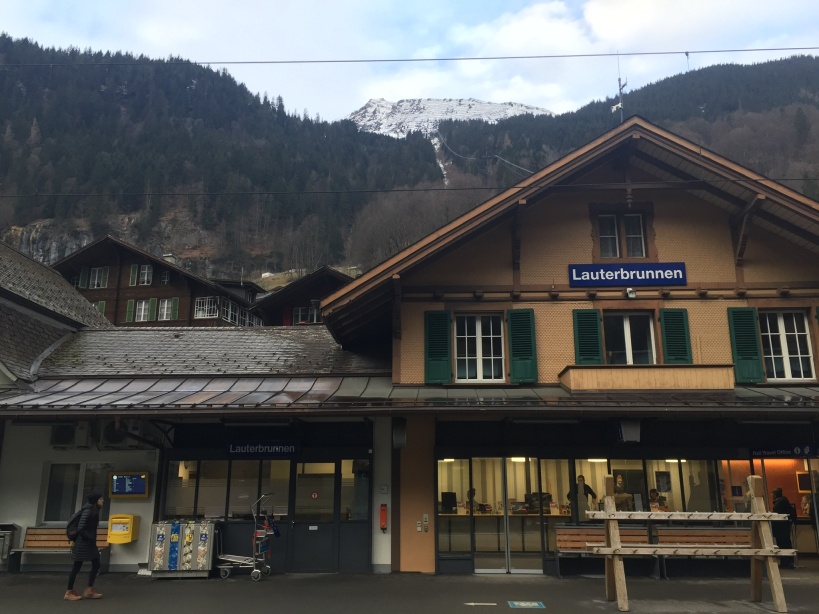 It was still a little cold in Lauterbrunnen because it was early in the morning, but the short wait did not make it feel that cold. 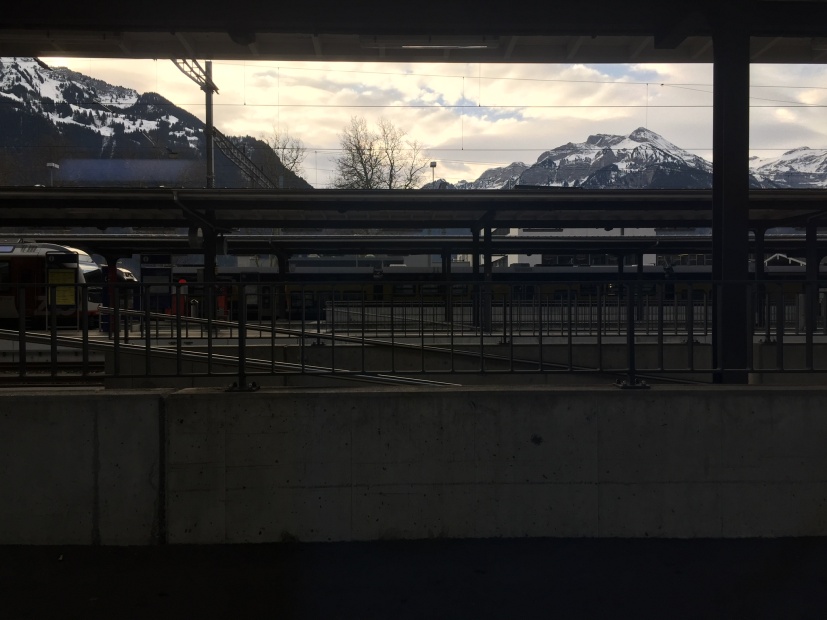 We had made it to Interlaken, Switzerland on a train and felt the constant descent from the valley we had stayed in for the last five days. The snow was still there, but reserved for the far away mountains. 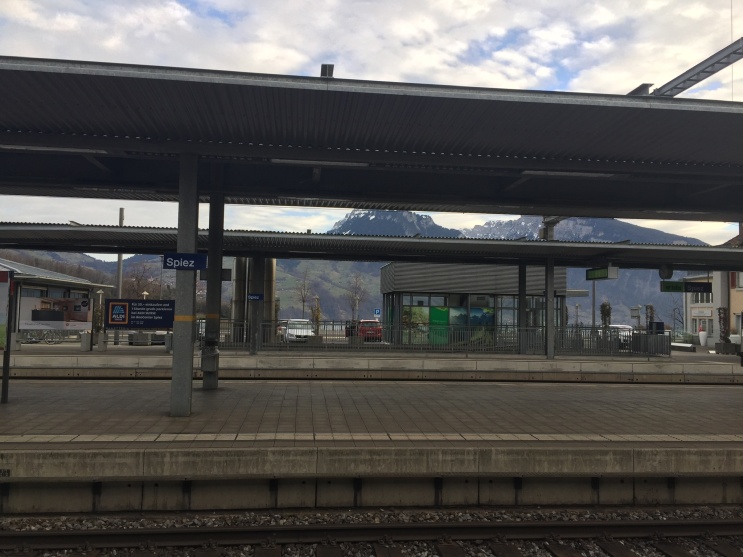 We hopped on another train to Spiez in Switzerland, and we could start to see more blue sky and the need to pull off the coat. 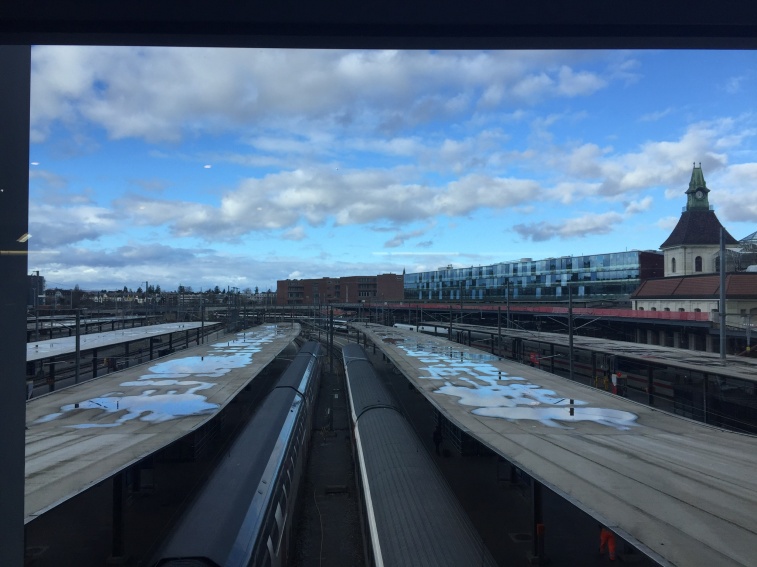 Basel was our last town in Switzerland. We had quite the break there and it was getting really nice. 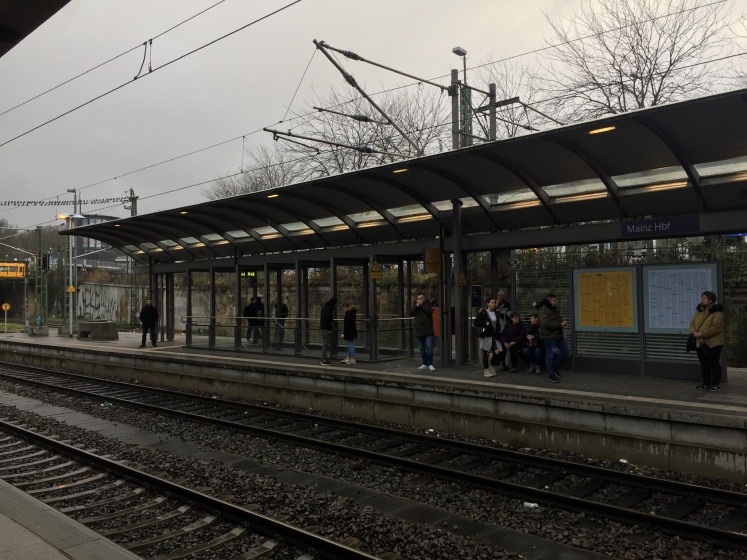 We reached the outer station of Frankfurt and had to put the coats back on and stick under the safety of shelter because of the rain that had come out of nowhere. 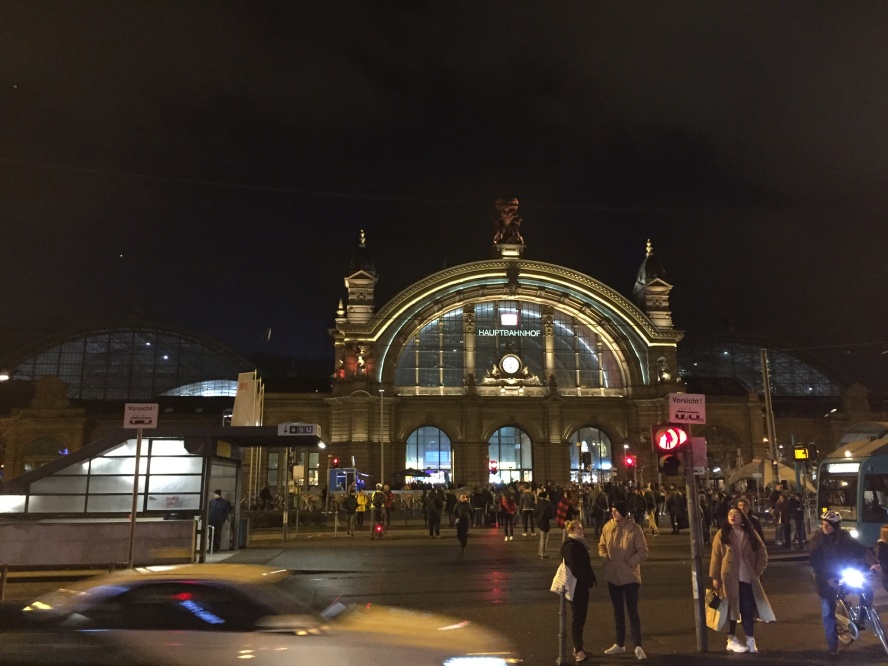 The rains had stopped in the twenty minutes it took us to get to Frankfurt’s main station, but it was still cool outside because the sun had dipped below the horizon. 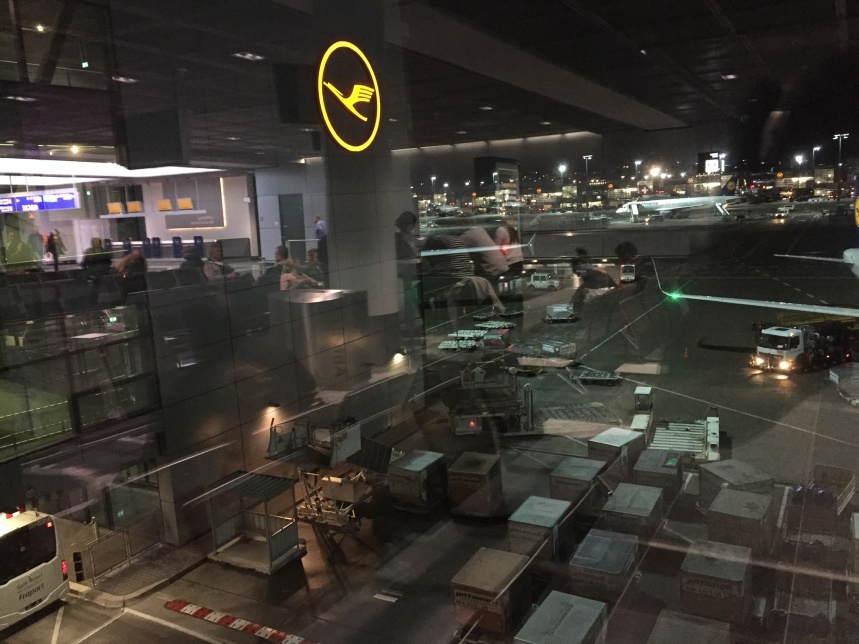 Even though it was cold outside, I was in Frankfurt Airport, and knew my next stop would be Thailand, so I packed my coat away for the next couple of months. I would not need it where I was going.

It was fun being out in Europe for the Winter Break. Thanks for following along as I got to enjoy the cold weather for a little bit. Never take it for granted because you will miss it when it is gone.

I am sure everybody has a person who is a teacher on their friend list on whatever social media site they follow, and it probably angers them a lot when they start getting those posts of those teacher friends showing pictures of the start of their vacation. If you are getting those, you at least see all of the memes they put up about how tired they are, and pictures of teachers running for the parking lots and bars as soon as that final bell rings. It is part of the reason that some people think that teachers don’t really work, but trust me when I say that the exhaustion level of teachers right before winter break is high, and it takes a good couple of days before they can even come to realize that they don’t need to sleep for twelve hours a night just to catch up on the sleep they have lost during the last month.

This is how I felt on Friday. The first semester at my new school in Thailand was fun, but I was also ready for a break. I needed time away from essays, and lesson plans. I also needed time away from the constant hot weather that I find in Bangkok. I longed for a cold, chilly Christmas environment, so I boarded a red-eye flight and went to the most Christmasy place that I could think of Germany. 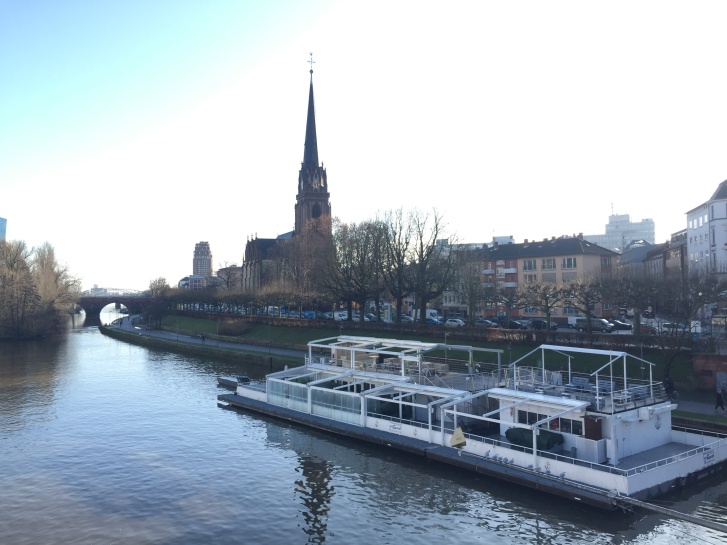 First off, to demonstrate how tired I was, I actually fell asleep on the plane. I am one of those people that have a hard time sleeping on a flight because I have to squeeze into the seat first of all, and then it is always just a little too cool, and the jiggling that happens from the other passengers, flight attendants, and the plane itself keeps waking me up. But I was so exhausted that I slept most of the twelve hours that I was on that flight, and woke up early in the morning the plane gently touching down in Frankfurt, Germany. 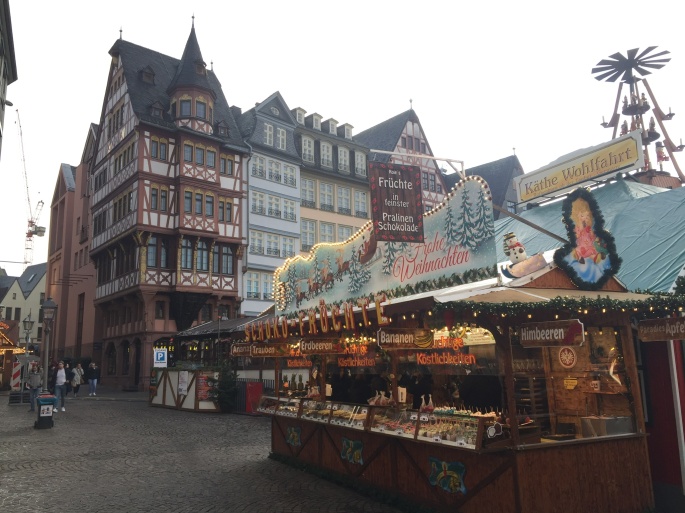 It was not my final destination for the day, but I wasn’t able to check into that place until the afternoon, and it was too early in the morning to sit around and do nothing. So I did what any other traveler would do, I found a locker to ditch my bags, got really caffeinated, and went out to see what the town had to offer. And considering that it was Christmas time, I wasn’t going to go look for statues, cathedrals, and museums that most people look for while in Europe. I was going to look for the markets that I knew were out there, and I knew that Frankfurt has one. 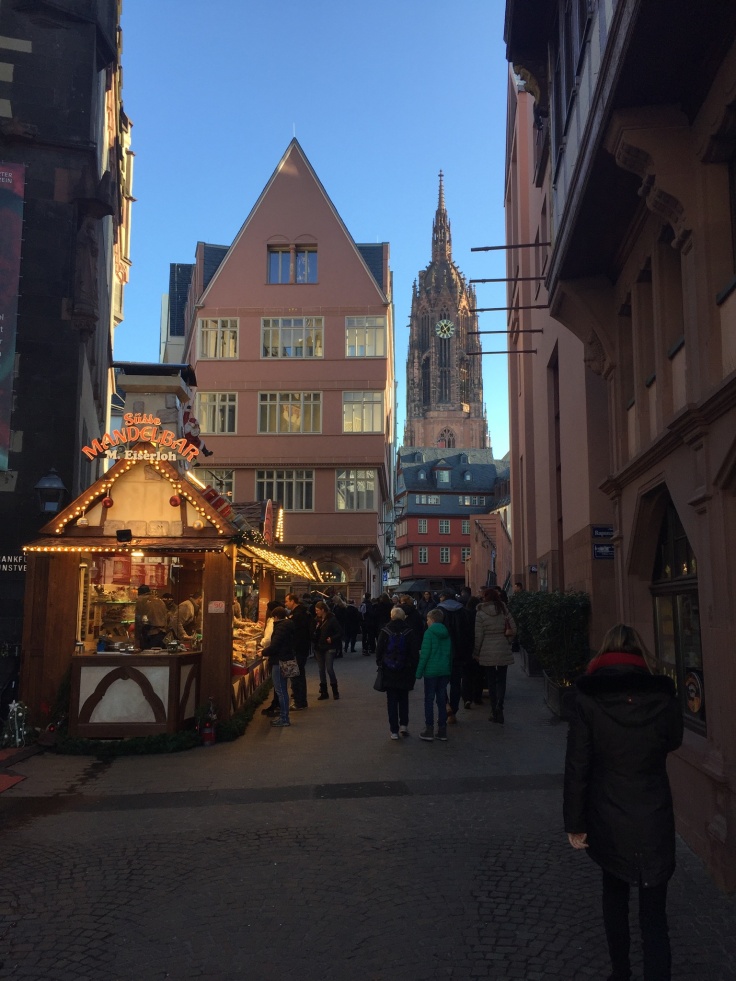 I’ll be honest. I did not know what to expect with these markets; I just knew that they were a big draw around this time of year. What I found was even greater than I thought possible. Basically, there are these small mobile stall that they install on the sides of their walking sections of town. They are all decked out in Christmas lights, and they sell various Christmas paraphernalia. There are simple rides like merry-go-rounds, and if you ever get hungry, there are numerous stalls that sell German cuisine. The smells are just as good. If the simmering meats don’t bring you to the stalls, the smell of mulled wine will get your stomach growling. It is everything, I had seen on those cartoons as a kid as to what Christmas was supposed to be about. It had that warm feeling that kept out the cool, brisk air of Germany, and it was a one-hundred and eighty degree turn from where I was twelve hours earlier. 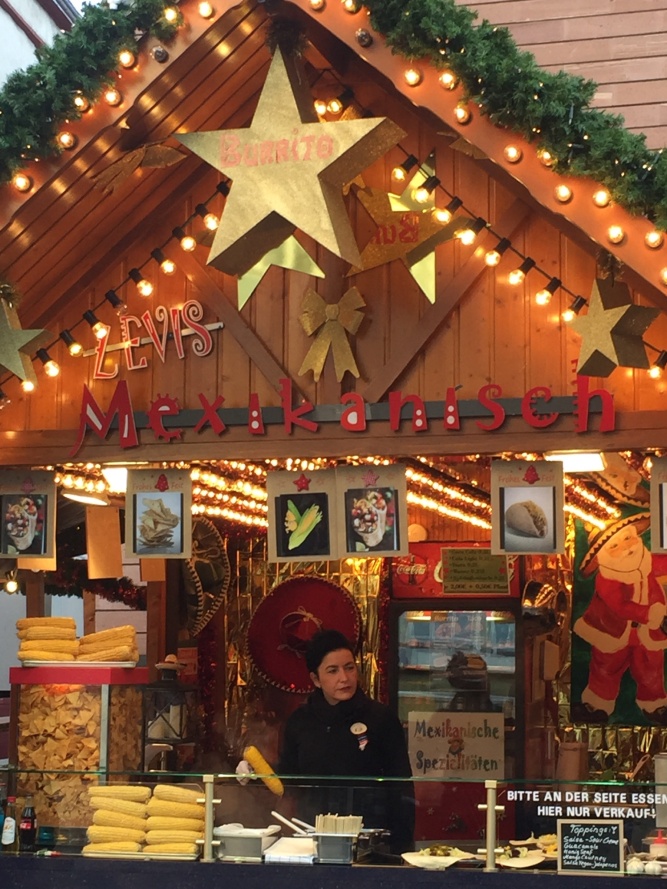 I loved the way that the Thai people built up their enthusiasm for Christmas, but it never felt quite right. It is hard to get into the season spirit when it is tropical weather outside, and you have to wear shorts just to feel comfortable. It doesn’t help when I have to dig through a stack of final essays before I can relax either because it does not give me enough time to unwind around a Christmas tree or prepare for the holiday. It was nice to put all of that behind and fly across the world to get that feeling once again. It makes me excited for December 24th for the first time in a long time. I guess it all comes down to going back to the source of Christmas to find that anticipation once again.

I hope that all of you can capture that feeling as well and I hope that you can find the time to unwind during this holiday season. Merry Christmas for Germany!