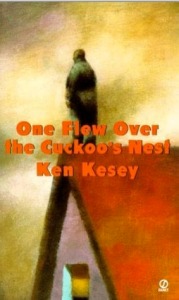 #1 – One Flew Over the Cuckoo’s Nest by Ken Kesey

Growing up, my siblings and I had recorded this movie off of television and would watch it three or four times a year. I always considered it one of the best movies ever made, but then someone told me that the book was so much better. I didn’t give it much thought because the book is always better, but eventually I found a used copy and bought it for a dollar. After reading the book, I could never sit down and watch the movie again. Ken Kesey’s words made me laugh and I saw the importance of civil disobedience. The book became an anthem for me, and I later found out it was the bible for the counter-culture movement. It was the perfect book for what was going on in the nation at that time, and I see its relevance again. It will just take a McMurphy to stir up trouble and motivate us to fight against the Combine that is holding us back. I never get tired of this story, and will laugh as hard the next time I pick it up to read as I did the first time I read it. Purely amazing.

You cannot help but to be moved when you read this book. Its profound message slams you in the face and lingers there for the rest of your life. Following the narrator as he tries to find himself in a world of prejudice people makes you wonder if you are him and he is you. It doesn’t matter that the narrator is an African-American living in the 1930s because the way Ralph Ellison portrays his story, you can empathize with his every move as he navigates his young life. I have not met one person who has read this book that has not been moved by its story, and sadly enough not enough people know of its existence. This is the great American novel that everybody talks about, and everybody needs to read it.

Some of you are probably going to argue that this is a trilogy and not just one book, but I am going to argue back that J.R.R. Tolkien never intended this to be three books. It was written as one book and the publisher broke it up into three novels. In fact Tolkien hated the name of the last book, The Return of the King, because it gave away the ending to the story. I would even go as far as to argue that The Hobbit and The Silmarillion should also be included under this title because Tolkien was not just writing a story but instead a history of Middle Earth and the linguistics that could be found among its inhabitants. It is just one story. But if I was forced to just look at one novel to represent the whole history, it would have to be this one. When I married, my wife showed me her wonderful hardback copy much like the one in the picture. I have often opened it up at random spots and just enjoyed the story from where I found myself. It is a lot like a bible to me, and there are many lessons to be learned from its pages such as the evil of addiction to power, how important hope is to us, and why death is something that we must all accept in our lifetimes. Many people will say that they would love to read this trilogy at least one in their lifetime, but I am here to say that once in your lifetime is not enough for this epic. It will always be one of my all-time favorites.

At the time I picked up this book to read, I had been reading a lot of stories centered around religion and mythology and I wanted to find something a little lighter. I was not prepared for what I found. I had no idea that a story about an Indian boy surviving out on sea for over two hundred days on a life raft with a three-hundred and fifty pound Bengal tiger would be one of the deepest stories I had ever read. It is the better story and explains religion more thoroughly than any of the previous books I have read on the subject. If more people would pick up this book and understand the meaning behind it, we might not have as much fighting going on in the world. I loved this book so much that it has been the only story I have finished and then immediately sat down to read it again. It has that much power behind it. 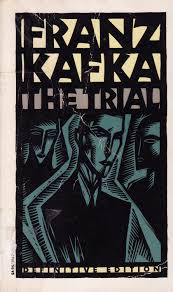 Do you ever believe that you are living in a bizarre Kafkaesque landscape in which some omnipotent power is guiding you through the surreal existence that you live in? Has logic been thrown out the window only to be scraped off the ground and presented back to you in a way that only makes sense to the holder of the logic? Do you wonder where this feeling originated? Then you need to read The Trial by Franz Kafka, and still the answers will never be presented to you. In this story that helped coin the term named after the author, Josef K. wakes up on his thirtieth birthday to be arrested for a crime which he is not aware of ever committing. Things get even worse for our protagonist because nobody will ever enlighten him to what his crime actually was, but he must stand trial for it anyway. It is a profound metaphor for modern life and its eerie parallel to everyone’s lives make it a must read. Just beware, it will leave you with more questions than it answers.

I have taught this novel five or six times in my tenure as an English teacher, and it has always been my favorite book to teach, especially when the students hit that moment when they realize what the book is actually about. There has never been another book like it, and if anybody attempts to write something as profound, it will be nothing more than an imitation. This book will make you laugh and make you think at the same time. People might disagree with me, but this is the most accurate portrayal of war ever written, and Kurt Vonnegut was able to bring to light the problem of PTSD long before they ever coined the term PTSD. If you have not read this book yet, read it, have somebody explain it to you, and then read it again because every time you pick this novel up you will see something new.

#7 – Crime and Punishment by Fyodor Dostoyevsky

A very profound look at the power of guilt. Dostoyevsky asks the question whether any outside force can ever punish us the way we can punish ourselves for the crimes that we have committed. The pains that we inflict upon others can never be justified in our minds, and the only way we can overcome our pasts is to face the wrongdoings we have inflicted upon others. Never has a story about an axe-murderer had so much power as has this classic by Fyodor Dostoyevsky. 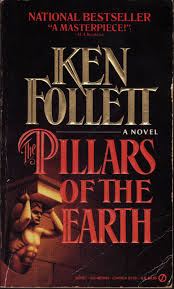 #8 – Pillars of the Earth by Ken Follett

When I picked up this book I didn’t have any expectations. I just knew that it was long and I needed something to entertain me while I was on a fifty day backpacking trip through Europe. I didn’t even know what it was about. The book was an orphan (a book left behind at the airport I worked at) and I thought why not give it a try. On the plane ride to London, I quickly learned the treasure that fell into my lap. There was no better book I could have picked as I toured the landscape of Europe, and visited its many sites and cathedrals. It explained all of the wonderful things I was seeing and brought them to life. The story allowed me to appreciate architecture and the lifestyles of those who lived during Medieval Times. It also showed me the way that politics took place during this time of the world. I have read a lot of historical fiction since then and none of them have ever reached the heights that The Pillars of the Earth have.

If you have read A Brave New World, you need to read 1984 as well. It will make you wonder which world it is we are actually living in. The strange thing is that both of these books are so relevant that their positions may flip at any time on this list. Unfortunately, I believe that we are living in an Orwellian society at this time. We are under constant watch by the state. Texting is dumbing down the English language. 24-hour media changes the dialogue in obvious hypocritical ways in order to fit their current agenda. We are distracted by issues that really have no relevance in order to keep the same people in power, and we must be in constant war in order to keep us in a state of fear and compliance. It is a bleak world, but similar to the one we live in. Others might disagree with the assessment, but in order to participate in this modern debate, you must read both books.

I had a hard time deciding which book was more important in this day and age, A Brave New World, or 1984. It is obvious that we are living in a dystopian society, but the question is which one. That is why this is a very important read to add insight into the world that we inhabit. We are products of our class and unable to achieve anything greater. We have also been conditioned to believe that the class we have been born into is the only one we will feel comfortable in. If we ever feel that something is wrong, we can always run for the comfort of sex, or soma. Our media is also about quick blurbs that are easily remembered and devoid of any meaning, but always promoting the importance of consumption. It is a Brave New World we live in and the most dangerous thing that could bring down this dystopian world is if we learn how to feel and think for ourselves.