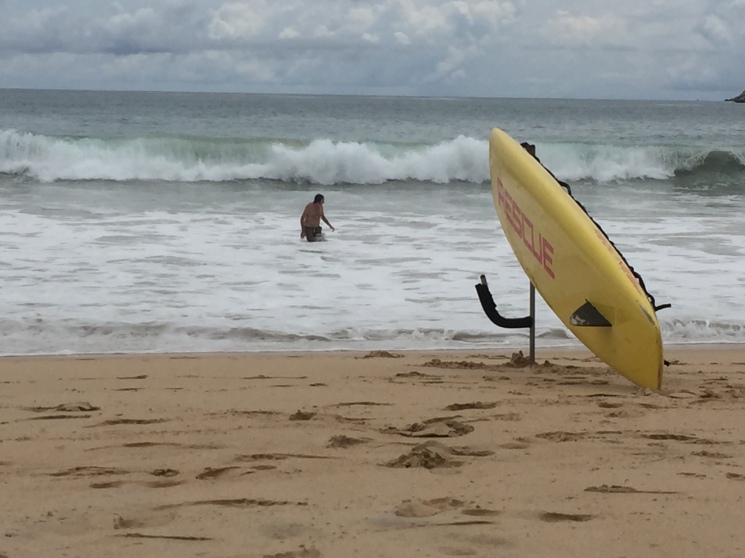 I know I said yesterday that I would attempt to make it to the top of the hill to go see the big Buddha this morning, but that is not going to happen. I could blame it on the weather, and even though there has been a couple of rumbles of thunder in the distance and one quick rain blew through our neighborhood, it was really not enough to make it an excuse not to go.

The real reason I did not want to hike up the hill today is because of yesterday afternoon. We went back to Noi Harn Beach to enjoy the waves, and that took a lot out of me. I know that spending a day relaxing on a beach does not sound like it would be enough to make for an excuse for being lazy today, but let me explain something about the waves that I encountered the other day.

During my life, I have seen surfing videos from time to time that show these huge waves that surfers ride. I have also been to many beaches and have never really seen these waves before. In fact, I was starting to believe that it was something that was made up, and I would never see them in my lifetime. Yesterday proved me wrong. The waves were there in full force. Some of them towered over me and I would have needed at least three other people standing on my shoulders to have been taller then them. That might be an exaggeration, but when you stand underneath one of these waves and look at them like the ant that you are, the really look that way.

For those surfers, this was a great beach to go to. There were many surfers out there yesterday, catching the waves, and riding them. But it was also a great place for other people as well. They had sectioned off a portion of the beach for people to swim in so they would not get in the way of the surfers, and the surfers would not run into them.

Being from Colorado and never having witnessed anything like this, I had to run out there and jump into them for a couple of hours. It is fun fighting against the undertow and watching the surge of a wave come at you. It made me feel like a nazgul in The Fellowship of the Ring as they got taken out by the waves on the border of Rivendale. And when I made it far enough out to have to fight the towering waves, the feeling was invigorating.

That was until I got back to our hotel, and felt like I had been thrown into a brick wall a couple of dozens of times. I woke up seriously sore this morning, and that is the real reason that I will not be hiking up to visit the big Buddha this morning. It is okay though because I still have one more morning in Phuket to accomplish this. I will try again tomorrow.