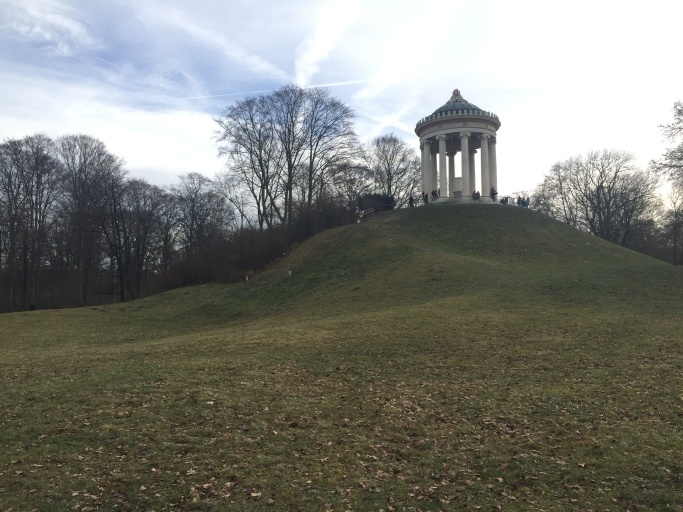 I was looking for a quiet retreat away from the crowds and the usual tourist insanity on my last day in Munich, and I heard about a mile and half square plot of land right in the middle that in 1789 they built a beautiful park, and called it the English Gardens. It wasn’t that far from my home, and it had the quiet that I was look for.

Basically, it is a series of paths that wind around various rivers with a couple of structures that give people a beautiful view of the whole expanse of green or allow the ducks who hang out here a retreat from all of the dogs that people bring here to stretch their legs. I have seen pictures of the park in the summer months, and it looks like it is the favorite spot of many people, but it does not have as many people during the winter months. There was always somebody to smile to along the path, but it gave me a sense of escape in the middle of a city that is always overrun with people. It is also far enough from city streets, giving the dogs that come here the freedom to run around like a dog park. There were many times during my stroll through here that I was greeted by different dogs that thought I might have a snack or at least a ball to throw.

There is even a little treat in the middle of the park, a beer garden. It is designed off a Buddhist pagoda, and is called the Chinese Beer Garden, but for the most part the food, and beer are the same that you can find at any other beer garden in Bavaria. It was the perfect place to grab a snack and a quick beer before moving on again. 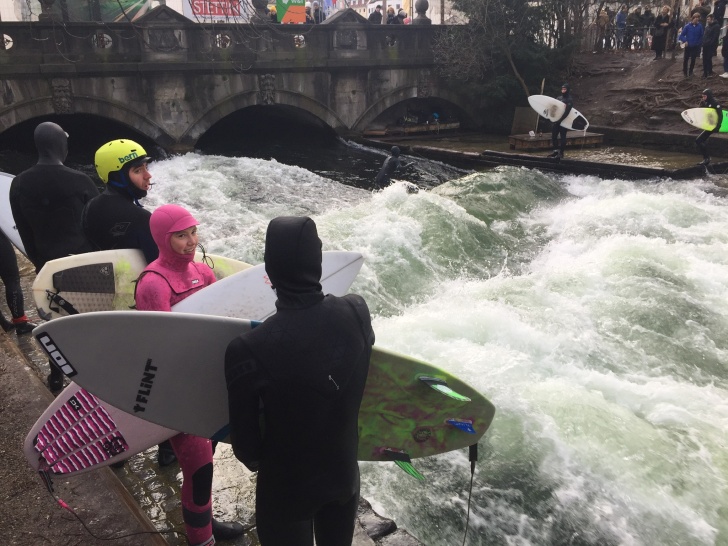 Besides beer and dogs, there are many other things available to do in the park. There were huge stretches of grass that would allow people to play soccer or throw a frisbee around, but the most interesting place came on the edge of the park. One of the rivers that runs through the park’s entry point is under a bridge that causes the water to come out as a series of rapids. People with short surf boards come to this point in the river and take turns showing off their surf moves. It was the one place where the crowds gathered because it wasn’t also a place where the surfers came, but it also a gathered a group of viewers to see these people surf these waves.

The English Gardens of Munich were the perfect place during a warm day in January to come out and visit. It offered enough quiet to feel like I had gotten away from the crowds but still offered enough to make me still feel like a tourist. It made for a really nice day in the middle of this vacation and it would easily be a place I would love to come back to again.