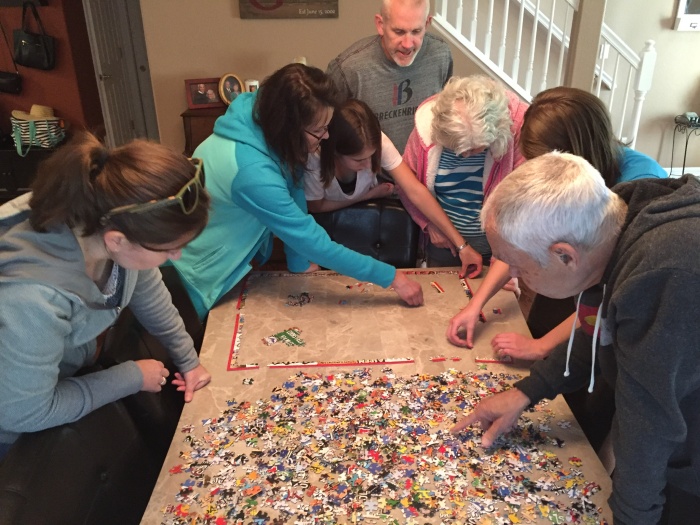 Even though one of the main reasons that we came back to the United States this time around is because we are homeless, and this is a great place to be while we wait to move into our new place. Though that may be one of the reasons that we are back, the real reason is to visit family and friends, and the summertime is the best time to do that. We had just landed in Denver, and were ready to spend time with my side of the family for a couple of weeks. The first stop here was at my sister’s place and she had invited my parents over for a bar-b-q and we sat in the back yard on a cold Colorado summer night to catch up. It was fun, but the night that really brought everybody together was when we walked by a recent puzzle that was laid out to be put together.

It started off simple with none of the pieces put together yet, but the edges had already been separated from the rest of the puzzle. I made a little joke that it wasn’t too difficult and I would be the first one to put two of the pieces together. I quickly found two of the obvious ones and connected them. Christine dismissed that as being too easy and that the real challenge was getting the pieces that looked similar together. Of course, I couldn’t let that challenge be dismissed without finding another piece to put in the puzzle, and quickly found another one. This is when my sister showed up to see what we were doing. It was only a matter of a short time before other members of the family came over. Like some modern version of a Norman Rockwell painting, we had all gathered around the table, and the puzzle started to pull itself together into the image that we saw on the box.

This simple pass time had this incredible power of bringing everybody together. Before I started to put together two pieces, family members were all over the place, inside and outside of the house. Some were watching videos on their tablets; others were looking at problems that were happening with this outdoor fire pit; while others were cleaning up the meal that we had just enjoyed. There was unity among the various pieces of the family, but the bigger picture wasn’t together yet. It wasn’t until two of the family members started to gather around the borders of the puzzle that others started to gather there as well. It was a slow process. Some connected with the building of the puzzle quickly while some of the others stood on the periphery, not willing to make the commitment yet. But as the puzzle drew one or more into putting it together, the final holdouts finally gave up denying the temptation and came into play with the rest of the family. Before I knew it, the picture was complete. Everybody had gathered around as one family unit.

As families grow older, the tendency to spread apart becomes more pronounced. Members find their own passions, and move to other corners of the globe. Even though they may not be present, they are a part of the bigger picture. It takes some kind of event to bring them back together in-between the borders of the family. Sometimes, it is something simple like a jigsaw puzzle on a cool summer evening. Other times, it is bigger events like holidays or celebrations. But when all of the pieces finally come together and the picture becomes some that everybody can recognize, family.

One thought on “A Puzzling Problem – The Move Day 5”