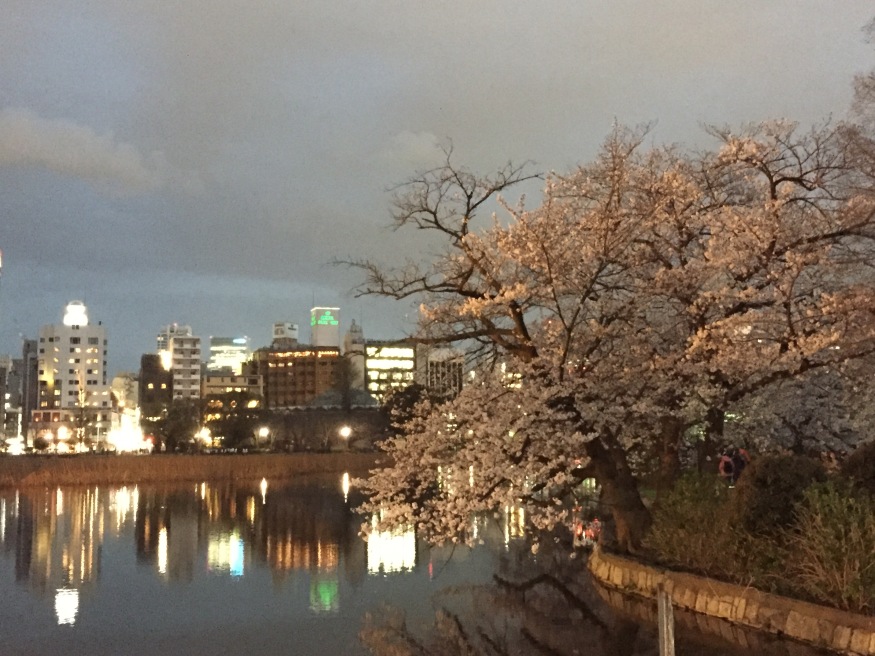 Seeing the cherry blossoms in Japan is on a lot of people’s bucket list and I always wondered what made them so special. They happen in other places in the world around the same time. In fact, I have seen them pop out every Spring that I have lived in Korea, and yes, they are pretty, but to put it on my bucket list of things to do before I die seemed a little absurd. But to the Japanese people, this annual event is something to get excited about.

It is a completely different feeling being in Tokyo during Sakura, or the cherry blossoming season. It only lasts for a couple of weeks, but people make the most out of it while they can, and they are also so happy throughout the course of this natural event. You will see people walking around with cameras all over the city, getting ready to take that perfect shot of the tress exploding in pink and white. They also gather in the parks during the night to celebrate with each other with picnics and the sharing of drinks. 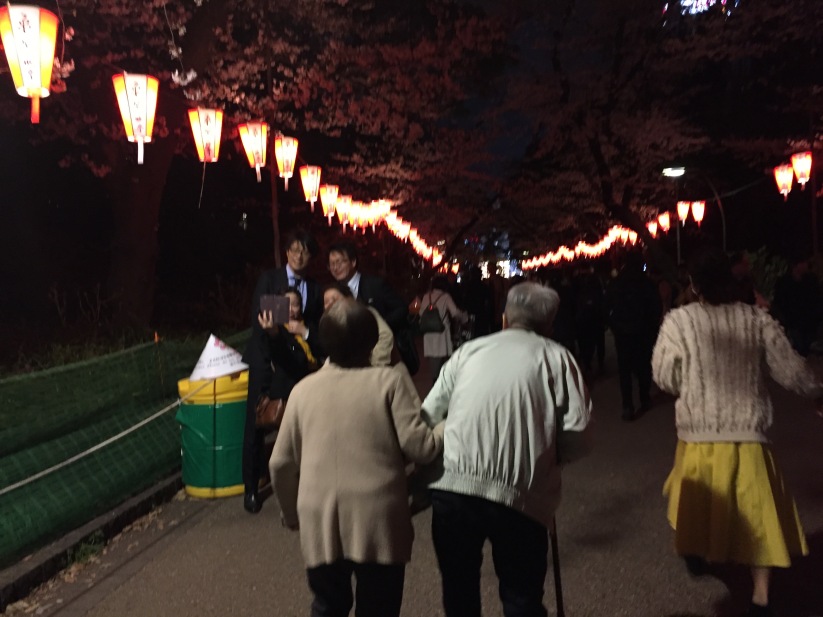 I think the best way to describe it is by talking about this older couple I witnessed at one of the parks during my stay in Japan. They did not move quickly, and they were bent over from years of hard work. The man held his cane in one hand, and his wife grabbed his other arm as the walked among the lanterns that Tokyo had put out to highlight the blooming of the Sakura. I like to think that they did not make it out of the house very much, but this was an event that they would not miss ever. As they shuffled down the park’s path, they had huge smiles on their faces as they peered this way and that to take in the beauty that was before them. The moment was truly magical for them, and I am sure that they had seen it every year of their lives, and every year, it was just as spectacular.

This is like Japan’s Christmas season, except the nature that they witness marks the coming of Spring and warmer weather. It does have that feeling of going out and looking at the Christmas lights during a snowstorm, except that it is not as cold outside, and I was a lot more comfortable taking in the views.

The whole city is not covered in Sakura, and I did come across the occasional lone tree making its mark. There are many places where the blooms really hit, and these are the places where people come together every night. Each one of the locations has its own charm and its own excitement, but there are tons of people gathered at each spot to enjoy the mark of this celebration before it disappears for another year. 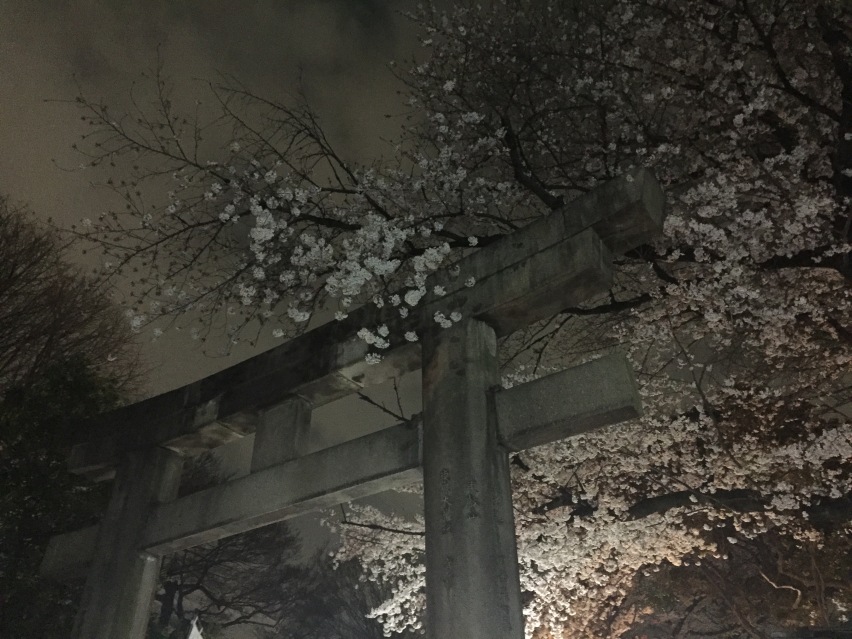 The ancient architecture adds to the excitement, as I was able to see the cherry blossoms frame some of the bigger shrines and extend out over some of there gates. I have not seen this same appeal in Korea even though I bet there are places where it does exist. They just seemed to go hand in hand in Tokyo.

They are not only fun at night, but it is still quite the sight to see during the day. I think I was out there during the height of the bloom as I was able to travel down one of the streets and see the trees line the canals of Tokyo. 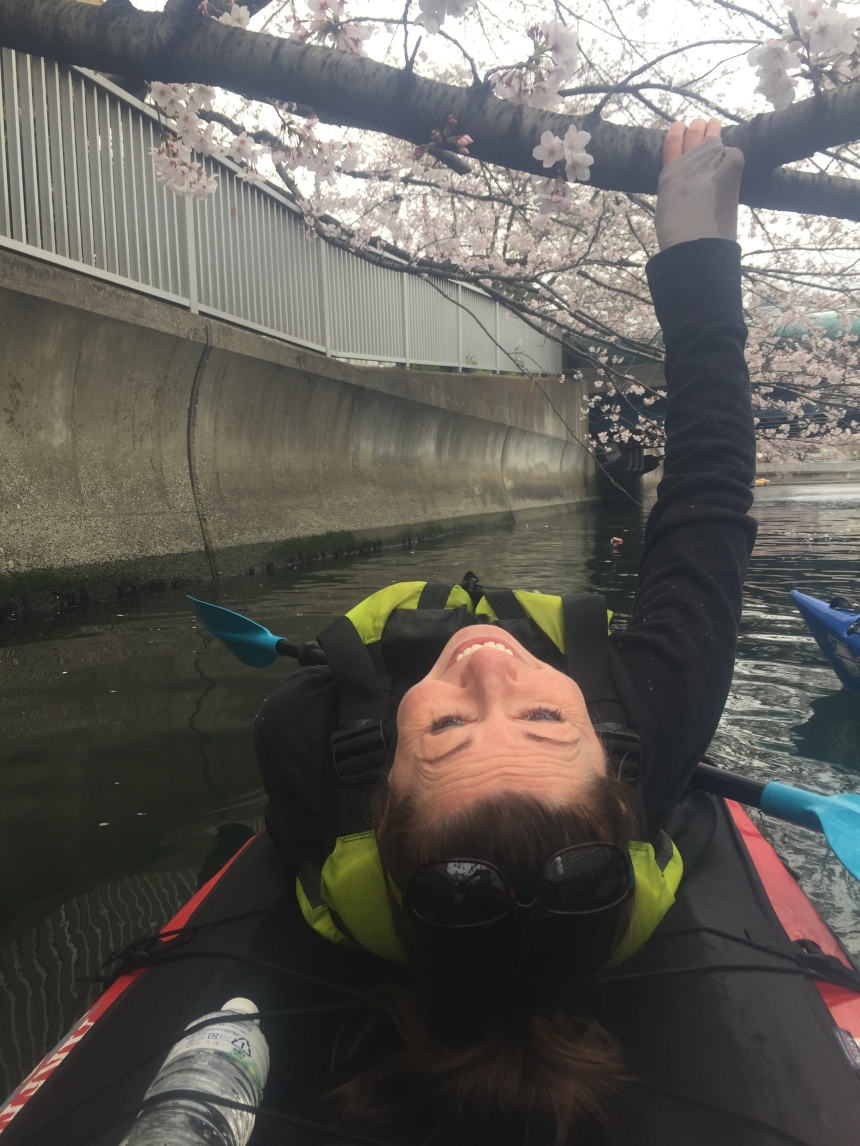 One of the best ways to enjoy them is to go out on the canals in a kayak, and get up close to them hanging out over the water. It was a great way to spend the morning while getting a little exercise. There are also a lot of tour boats that travel up and down these canals, and many of the guests would wave at us as they traveled on by. But it was the pre-school children that were my favorite. The path that we took went by many of the schools, and the teachers took the time to take the kids out on walks to enjoy the Sakura as well. Any time they saw us, they would wave at us and say the only two English words that they knew, “Hi” and “Goodbye” when we drifted away. It just added to the joy of the moment. 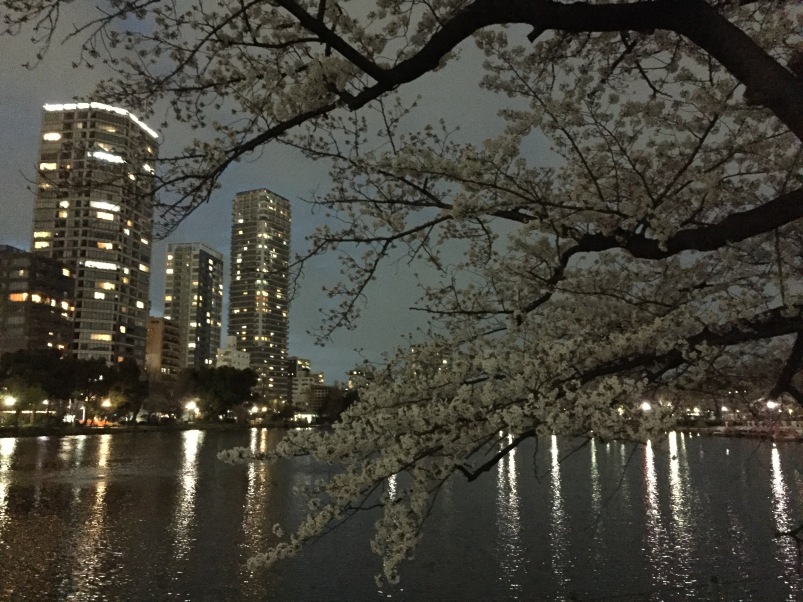 So I knew that by coming out to Japan with the goal of seeing the cherry blossoms, I would be something really pretty. What I did not know was I would be caught up in the excitement of the city celebrating one of their favorite times of the year. I learned why many people put this on their bucket list, and I am glad I got to experience it once in my lifetime. It has made this trip to Japan probably my favorite one that I have been on so far, and it is going to be hard to beat the calling of Spring with the Sakura if I ever get the chance to come back again.

Goodbye, Japan, and thank you for the wonderful trip.