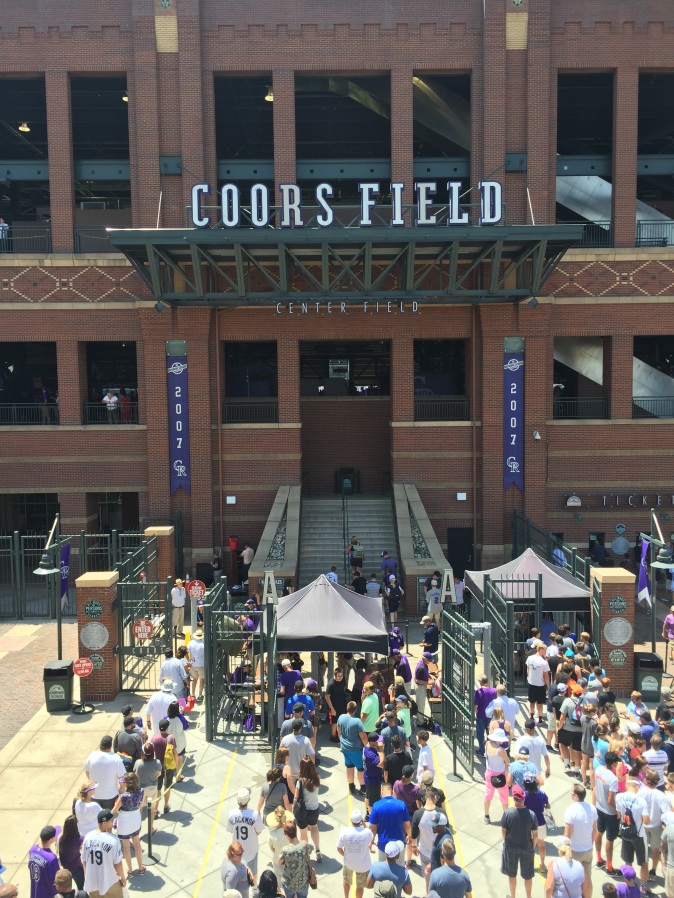 The weather has been really hot this summer in Colorado. If you have friends from the area, I am sure you have seen the posts on Facebook about people melting in the street, and how on some days it has been hotter here than it has been in Las Vegas. Denver is turning into a dessert, and when things cool off a day, people look for something to do outside so they can enjoy the Colorado summer while it is available. The best way I have found to do this is to go to Coors Field and watch the boys of summer try to stay in the running for the playoffs in October. 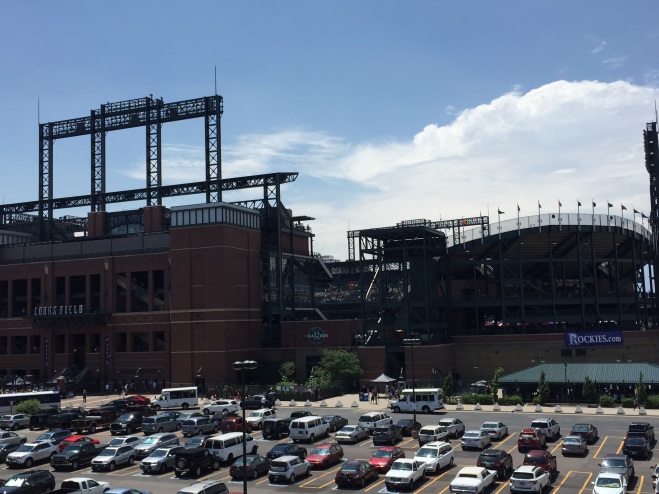 Yesterday was a beautiful day in the low 80s with a lot of cloud cover that made for the perfect day to go and see the Rockies play. Coors Field is also a great ballpark. It has been a dream of mine to see a game in all of the ballparks in America, and this has now become really hard to do that I live in a different country, but that does not mean that I can’t enjoy the ballpark that was in my backyard for the last twenty years. When they designed the park, they wanted to give it that classic ballpark feel with a couple modern upgrades. It has a nice open air feel to it, and there is not a bad seat in the house. They do have ivy growing in the right field behind a series of fountains that they will turn on full blast anytime one of the Rockies hits a home run. It does have a bigger outfield than a lot of other parks but that is because balls have a tendency to fly longer in the thin air. And if you are looking for a good beer, there is a craft brewery in the building. A perfect addition for the people of Colorado who love their beers. 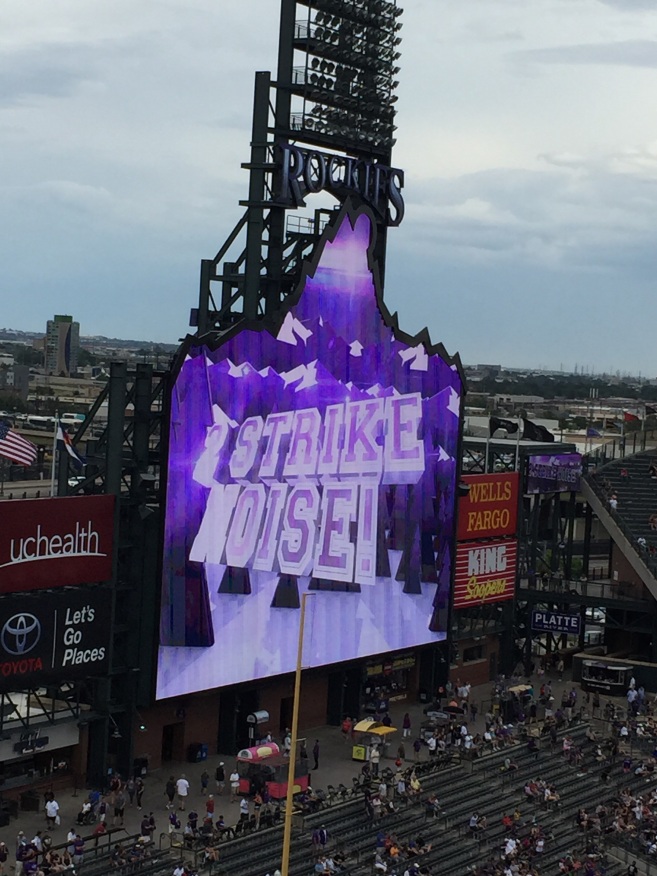 But they have since added some other features. There is a huge scoreboard in left field that highlights many part of the game on its high definition screen. There is a series of bars on the top level that are always full even if the Rockies are doing poorly because it is a great place to be seen on the Denver scene. Many people were angry at that addition when it first came out because it seemed like a waste of money for a team that could have used a better bullpen, but ever since it has shown up, the Rockies have been contenders more than they have been in the past. It does clear out the stands though because everybody wants to hang out there instead of in their seats. 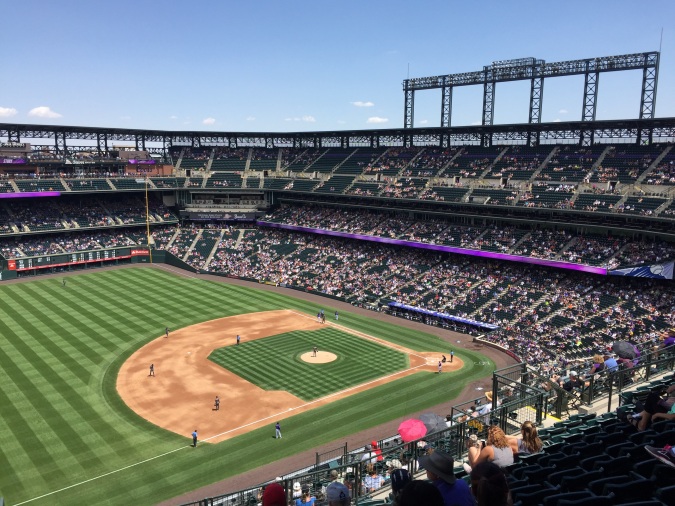 No matter what you think about the addition, it is still a great place to see a game, and I was surprised at the crowd that had shown up in the middle of the day on a Thursday. The announcement that they make every game stated that there were 41,000 people in attendance, and this is pretty amazing considering that there are only 50,000 seats in the place. A lot could have contributed to this. The Rockies have won 12 out of their last 16 games, making them only three and a half games out of first. They were also playing the team that was in first so this would give them an opportunity to catch up a game. And it apparently was kid’s club day. There were groups of kids screaming in the upper level and they did not necessarily know what they were screaming at, but they were having a good time. They also had to leave early so they would be back at their kid’s club location so their parents could pick them up, but it all added to the atmosphere. 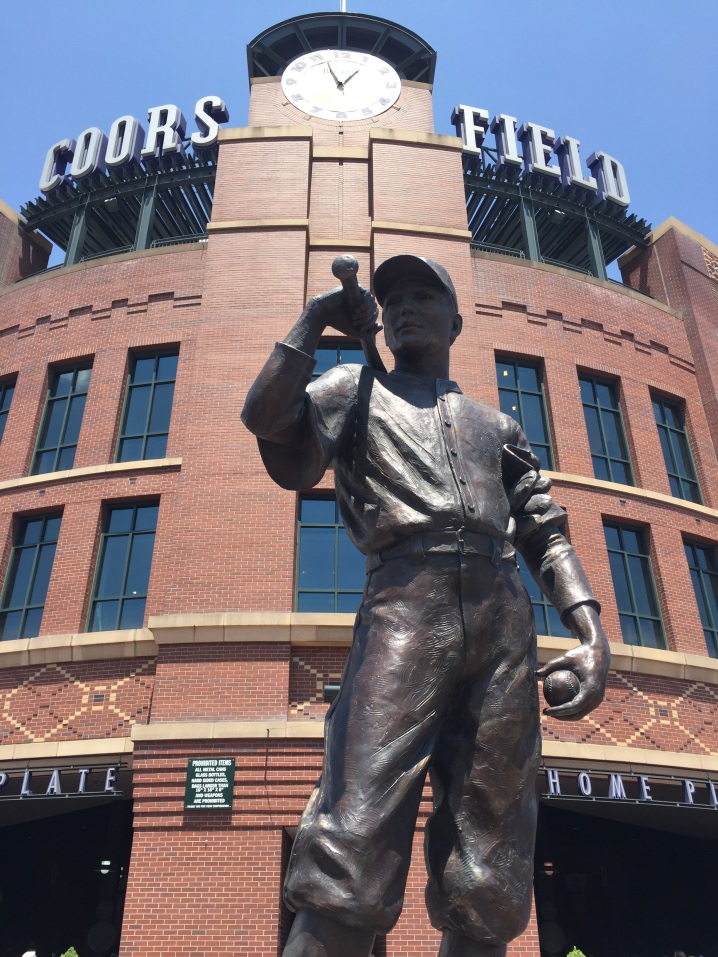 It was a great game. The Rockies came back in the sixth inning to win the game five to one and the bullpen did a great job not losing the game in the final inning. It was the perfect way to spend a warm Thursday afternoon, and it will keep me interested in what is happening with the Rockies as they make the push to the end of the season. I just wish that it did not take so long in-between times that I got to visit the place because it is easily one of my favorite ballparks in the nation.