I got to know a little more of Lisbon by exploring a different neighborhood than I did last time, the Bairro Alto. Even though I really enjoyed the Affama neighborhood, I thought that this one had more character and there was a lot more to see here. The most memorable one was the Carmo Convent. I was able to see it from my vantage point at the Sao Jorge Castle because it sticks out like a blemish on a teenagers face when you scan the city. It is the ruins of an old cathedral that sits in the middle of town begging for people to visit.

Basically, back in the day, this cathedral was the center of the Catholic Church in Lisbon, but on November 1st, 1755 a terrible earthquake hit the town, leveling many of the structures there, this one included. It also caught on fire, and all that is left is this husk of what once was a great cathedral. The city of Lisbon has turned the insides into a park, leaving the remains behind for anyone to tour if they find themselves in this corner of the world. All of the people who were buried there still remain, and the rectory has been turned into a museum with a collection of great art from all over the world. Viewing this art work made me contemplate the nature of art and how it holds up over time.

Being in Europe, I have seen a lot of art. It is kind of what you do while you are out here. Some of it has really stuck with me because of its magnificence, and I am always surprised at how it is collected in museums, palaces, and cathedrals. Every time I think I have seen it all, something else pops out to surprise me such as this mosaic of John the Baptists at the Church of Sao Roque. At first I passed it off as just another holy painting, but upon further inspection I realized that it was a bunch of tiny stones put together to create this masterpiece. Where else but Europe would I be able to see something like this.

But as I toured the neighborhood more I found that art did not need to be collected in only these places. It was all around me. I went into the Cervejaria Trindade because it was an old monastery that was turned into a bar, and had the only porter I have found since I have been out in Europe. Of course, I had to try it. But the bar also had a collection of old painted mosaics all over their walls that dated back to when the place was one of worship and reflection. It is a tribute to the people of this great city that they would keep this artwork for people to enjoy centuries later even if it wasn’t in a place where I would expect to find it. 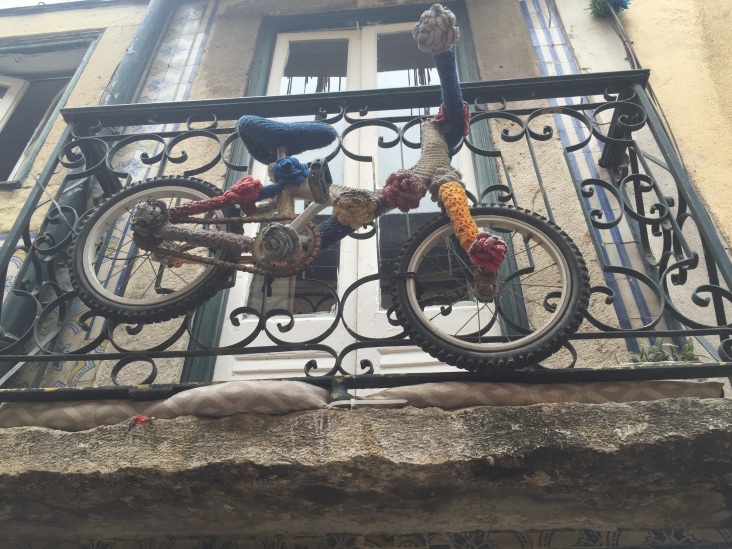 I started to wonder if art was all around me no matter where I went. Of course there is a lot of graffiti on the walls of the city, and some of it is just a waste of spray paint, but there have been a few that I have been impressed with. There are the simple vendors with their collections of painted scenes that they are trying to sell to make a quick dollar. And then there are the people who get creative with their artwork. I would have never thought of knitting a colorful cozy for a children’s bike and then displaying it from my patio for the whole world to see, but if I really looked for it, these were the kind of things I could find on my stroll of this part of the city.

It is what I really love about being out in Europe. Everywhere I look there is someone expressing themselves through their art. Some of it will last through the centuries, and some will pass away with the times, but it is all around me. It is why I am always looking around me to see what other exciting thing I can see. It is all under the same roof that is left behind of the Carmo Convent, and it is the whole collection of this art that makes up the city of Lisbon.