Welcome from Pyeongchang, and the Winter Olympics, and I can report with full confidence the weather is perfect for these games to take place. In fact it is right down cold. Last night when we were coming back from the games the weather outside register 11 below zero Fahrenheit. I don’t know what that is in Celsius, but any way you look at it, is cold. The nice thing about it is I have finally gotten to see that snow that I have been looking for the last couple of months. While I was driving back from the bus station, it was starting to spit, and by the time I got back to the pension, it was dumping big fluffy flakes that would turn the landscape to the Winter playground that is perfect for the Winter Olympic games. 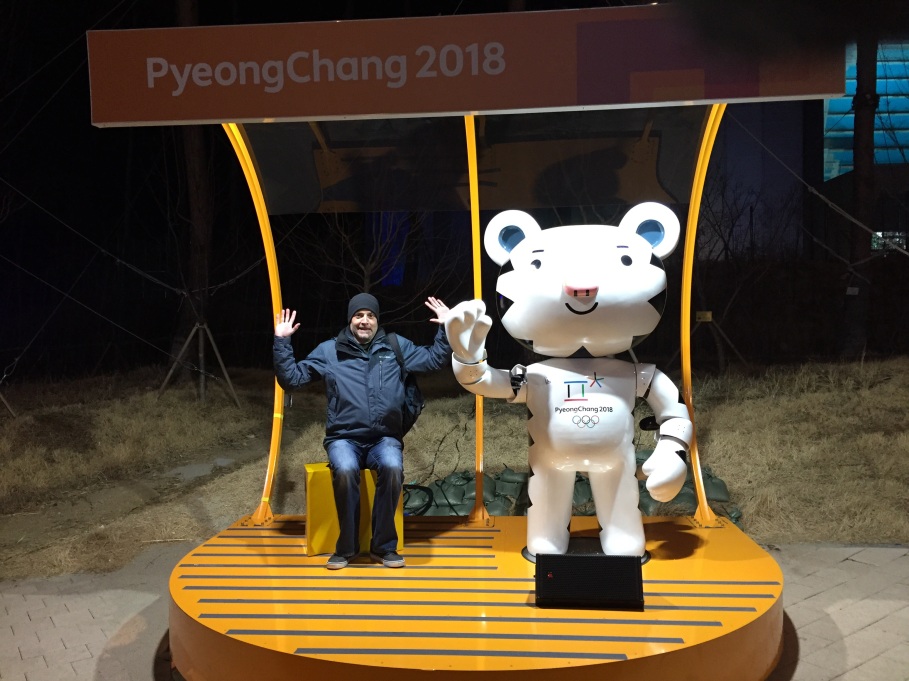 And it was in this icy landscape that I got to go and experience the Olympics, Korean style. My first night was spent in what was called the cluster. This is where most of the media is housed, and where all the big stadiums are. I have tickets to three of the different stadiums here, and another one on the Kwanhong campus which is the only building that was here before Pyeongchang was selected as the place to house the Olympics. But before then I got to wander around the cluster checking out the sights.

All of the sponsors have booths along the way and NBC’s Today show broadcasts live from the plaza. I was able to watch them set up for the next show even though I did not get to see any of the stars of the show. In fact, it was oddly quiet among the buildings that were set up in this little corner of Korea. I was expecting to see a lot more people moving off to various events and participating in all of the fun the Olympics had to offer. I did see a lot of security. The Police wander all over this place in packs to make sure nobody is doing anything dangerous, but I saw them spend more time posing with Bandabi, the tiger mascot of these games. And of course, there were a lot of people hanging outside of the McDonalds, but that was probably because this was the only place serving food with any substance in the cluster. In fact, that is probably the one serious complaint I have about this event. I went into the stadium for my first event thinking I would find some food, but I was told that they were out at every spot I stopped at. It just showed me that the Korean Olympic committee was not prepared for what was going to happen. I hope that they can correct this before the end of the week because I do like to eat from time to time. 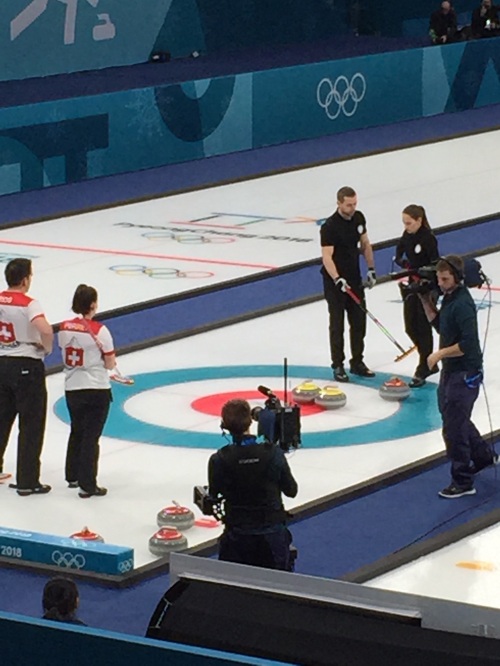 It was perfectly fine though because I got to spend the bulk of the night inside watching the semi-finals of the mixed doubles curling between the Swiss and the O.A.R. For those of you who don’t know, the Russians were disqualified from the Olympics this year due to some questionable practices during the last Winter Olympics. Because of this, they were allowed to send some athletes who did not engage in this behavior, but they could not come under the Russian flag, so they are designated as the O.A.R. At first I couldn’t imagine what this meant. My thought was “Officially Ain’t Russian” but I soon discovered while watching the match that they were consider “Olympic Athlete from Russia”. In retrospect, it is a more respectable distinction. 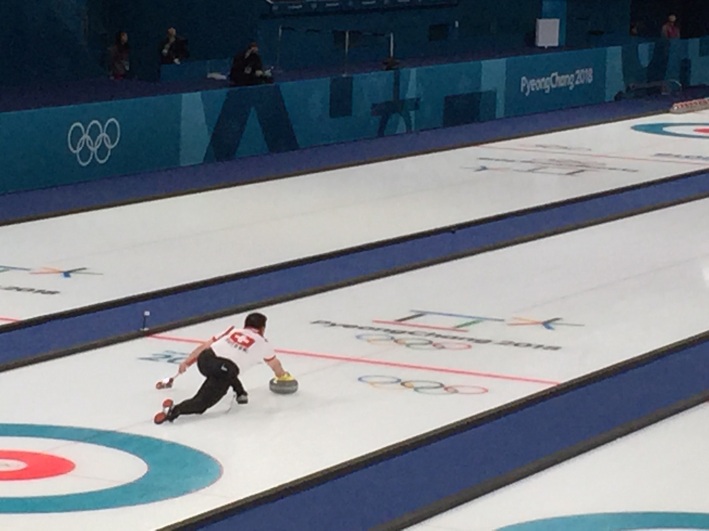 Curling is a strange sport to watch, and I was surprised at the crowd that had gathered for the event. I have no idea where they came from because it was empty when I first got there, but as soon as the event started, people started piling into the Curling Center. Some people even really get into this. Some people from Minnesota that I met on the bus down to cluster were out here specifically for these events. They had watched the Americans in their earlier events, and had tickets to not only the finals, but the game between the third place and fourth place teams. And even though it is like watching a big game of shuffle board played out on the ice, it does have some cool aspects about it. The participants wear these really cool shoes that allow them to glide over the ice. I would love to get a pair of them for my classroom, but then I would spend a lot of my time waving my hands up in the air and telling my kids to “look at what I can do.” It is probably a good idea that I stick to the traditional way of walking around the classroom.

The game itself looks like something that would be really fun to try if I ever got an opportunity to get on to one of the courts. Of course, it would be more fun if there was beer waiting for me in between each throw, but I could see myself wasting away an afternoon playing this with a couple of friends. As a spectator sport, it does not hold the same appeal. You need to be quiet to not distract the thrower, and then you patiently wait as you watch the stone slide slowly across the ice, guided by the helping hand of a sweeper. At least, I was entertained by the not-Russian team as they yelled at each other to sweep at the right time and the right place. I am not quite sure what they were yelling at each other, but it made me suspect that they were not really good friends. Or it could have been Russian for you are doing a really good job and I am glad to have you as a partner. It didn’t seem that way though.

All in all, it was the perfect way to spend my first day at the Olympics and I can’t wait to see what the next couple of days have to offer as I get to experience the events with more of audience participation with them. Hopefully, I can find a place to eat, and place to stay warm in the meantime.

One thought on “Pyeongchang Olympics – Day 1”